This will be my final Manchester On The Road blog so I thought I would make and share a video of everything that I got up to while abroad – I hope you enjoy it!

So now my exchange has come to an end and I had lots of videos that I thought I would put together to make a little video. I was unable to upload it directly onto the blog but here goes my first video blog!

Greetings Manchester! I was just about to upload a video that I made about Hong Kong when it popped up that a post I wrote weeks and weeks ago had failed to post! So here is the reattempted post, I hope I have more success this time!

Since my last post it has been mostly mid-terms and travelling but everything seems to have calmed down now at CUHK! We had a week off here for Chinese New Year and being in China for the Lunar New Year celebrations was such a wonderful experience. On New Year’s Eve my Chinese friends held a dinner party and cooked foods from the provinces they were from – I even tried rabbit’s head (a delicacy in Sichuan province).

On the first day of Lunar New Year there was a huge parade throughout Kowloon, with lion dancers, dragon dancers and a number of international guest performers representing countries from Peru to Japan. Perhaps the highlight of the Lunar New Year celebrations for me was the half hour firework extravaganza that took place in Hong Kong harbour on the second day of the Lunar New Year. Although I had to wait an age to be at the front for the best view, the show certainly did not disappoint – the Chinese did invent fireworks after all!

To mark the end of the Lunar New Year celebrations, I headed off to Taipei to see the Pingxi Lantern Festival which took place on the 14th day of the new year. In Taiwan they speak Mandarin so I was able to put my few week’s worth of Mandarin lessons to the test and unsurprisingly it didn’t take me long to find out how limited my basic language skills were! Thankfully most people spoke English so I was still able to get around and check out Taipei’s major sights. I really enjoyed visiting Taiwan’s National Palace Museum which houses many of the finest Chinese antiques spanning over five-thousand years and gives one a glimpse into the heights of Chinese civilisation. The Lantern Festival was spectacular, although Pingxi is pretty far out of Taipei, and seeing thousands of lanterns shining in the night sky was a truly memorable experience. I even managed to make it back to Hong Kong the next morning in time for class, so all in all it was a pretty packed weekend!

The mid-terms started just before the Easter ‘break’ (which was just a bank-holiday weekend) and I don’t think that I had ever had a mid-term before because the mid-terms here just replace the essay that is usually due for the middle of the term at Manchester. Still though, they weren’t too bad and they count for quite a lot of the final grade so I can’t complain – although I do still prefer essays. After the mid-terms I took a trip to Hanoi, Vietnam as it is only a two-hour flight from HK, making for a nice weekend trip! The nature in the surrounding areas was stunning and I took a bamboo boat through the rivers up in the mountains. Oddly, the woman rowing the bamboo boat used her feet rather than here hands, however we still went through the gorges at a reasonable speed! But the best part of Vietnam? It has to be to coffee. I know that I probably consumed a month’s worth of coffee during me weekend trip to Vietnam but it was just beautiful. Oh and I got to go on a water buffalo…see the picture below. 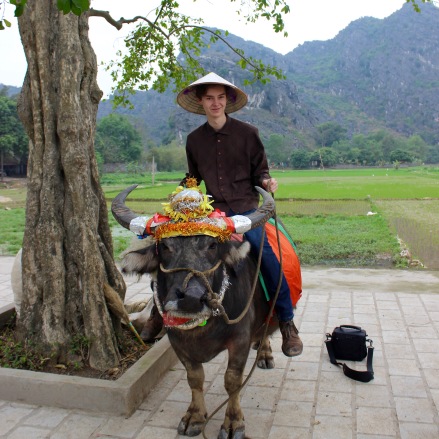 Concerning my ambassadorial role for UoM, I recently showed Professor Stephen Flint, Associate Vice-President for Internationalisation at Manchester, around CUHK along with Beverlyn Langat another Manchester student. We talked about our exchange so far, how much we were enjoying ourselves and how life at CUHK differs from life in Manchester. I have also met with the CUHK students who are coming to Manchester in September and/or January at an exchange session. We had a little Q&A and I tried to resolve any queries they may have about their exchange. They seemed both excited and apprehensive – as was I before coming to CUHK! I am looking forward to seeing them in Manchester! I payed Dr C C Chang a visit and thanked him for his generous scholarship which has allowed me to do many more things that I could have otherwise done and we talked about and when I return I will write a longer piece about the scholarship for the International Programmes Office Finally, I have also been getting involved with cultural exchange activities here at CUHK. I have spent the last few weeks learning the famous lion dance and for the language centre’s mid-term party, the lion dance team did a group performance! All I can say is that it is much harder than it looks and quite a good work out! 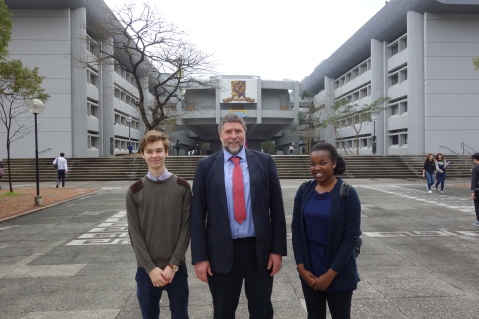 I have been at CUHK for almost three weeks now and while everyone at Manchester has just finished exam season, here at CUHK we only have one more week of classes until the Chinese New Year break – meaning I have a lot to talk about!