Welcome to my blog! Here is my first post – the pre-departure nerves, exhausting flight and finally my arrival in beautiful Sydney. Enjoy!

It’s getting pretty hard to pretend that I’m not actually leaving now that my flight is in 4 days, but I’m doing my best to avoid packing or saying goodbye to my friends. I’ve got my visa, flights are booked and I even have somewhere to stay when I arrive, but I still can’t quite believe that I’m going. Of course I’m excited, particularly because I’ve Google Maps-ed where I’m staying and it’s about a 5 minute walk from Bondi Beach, but the fact that its winter down is Oz is making me reluctant to leave this British heat wave!

Last Thursday I had drinks to say goodbye to most of my friends, which was very sad but it’s hard to imagine not seeing them for a year. I know the year will fly by but I can’t imagine being without any of my friends for so long. I’m saddest to be leaving my sister whose first baby is due in September – I won’t get to meet my new niece or nephew until they’re ten months old!

I’m also not concentrating too much on the university aspect – I’m hoping that will all sort itself out when I get there. At the moment I’m mainly focussed on getting through the 3 day flight, particularly the 10 hours I have to spend at Abu Dhabi airport.

Well, if we’re including the journey, its more like my first 96 hours (or something, I lost track somewhere around Abu Dhabi), and the journey was so long that it deserves its own paragraph. Saying goodbye to my parents and best friend at the airport was pretty emotional, and I didn’t really stop crying until I’d left Sydney airport. Apart from the tears, both flights were pretty uneventful, and the coffin-esque sleeping pod at Abu Dhabi airport was something of a highlight of the whole trip. There was also the slight issue of the Jewish fast that started at sunset on Monday night, which happened at some point while I was flying over the Indian Ocean. I might have been slightly lax in my calculations as to when sunset was, but who can blame me? 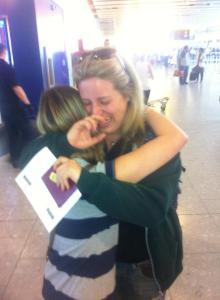 An emotional goodbye at Heathrow

Anyway, I’m here now and hopefully wont have to repeat that ordeal for a whole year. I landed around 7 AM, went through a very diligent Customs and finally made it to my hosts in North Bondi. At this point I was emotional, scared and overwhelmed, but mostly just very, very tired, and not caring about adjusting my body clock, had a 4 hour nap. This really didn’t help my jetlag and I woke up today at 4.30AM, convinced it was mid-afternoon. I’ll get there eventually. After my nap I wandered down to Bondi Beach, where it promptly started to rain, so I sheltered for a while and then walked home. Today was my first and last day as a tourist in Sydney, before I start university and become a proper Australian (kind of). I took an open topped tour bus around the city and was completely blown away by the beautiful parks, harbours and architecture. I’m usually more of a countryside fan but Sydney is completely breathtaking. I fell in love with the amazing parks dotted around the city and the sparkling  ocean visible from most of the city centre, next to huge glass skyscrapers home to corporate headquarters, and of course the iconic Opera House and Sydney Harbour Bridge. Seeing Sydney really got rid of the homesickness that I’d been crying about only hours earlier.

Prawns (I think) at the fish market 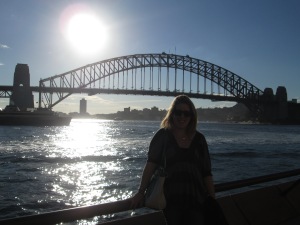 A low point though, was at the fish market, where I stopped to grab some fresh sashimi for lunch. The salmon looked amazing, like it had been swimming around less than half an hour ago. I took my lunch to the eating area outside, where I had two pieces (admittedly the best two pieces of sashimi that I’ve ever had) before being, and I don’t use this word lightly, viciously attacked by a flock of seagulls, that stole my salmon and knocked my pot of soy sauce all over my new jeans. Naturally, I screamed loudly and repeatedly, further embarrassing myself. I had an apple for lunch instead.

Orientation has started, I’ve navigated the Sydney transport system, met my fellow Manchester exchange students and now I’m well and truly settled in. My bank card even arrived yesterday so I’m officially an Australian. I was blown away by the university on the first day of international orientation – its so huge that Manchester looks like a private study room in AG in comparison. The Great Hall (and it does actually look like Harry Potter) is modelled on Cambridge and is very impressive. The University is typically Aussie in its laid-back attitude; our first day involved a sea safety lesson, promotion for Spring Break vacation packages and an earnest plea by the Study Abroad coordinator to fall in love with an Australian, and to bring them back with us to do study abroad in the UK!

Enrollment itself starts tomorrow, and with it all the boring things like lectures, timetables and library cards. But the Welcome to Sydney party on Thursday should be a highlight – more on that soon!

One thought on “And she’s off…”