When -6 starts to feel like it’s not particularly cold, you know you’ve settled into New England – or so my new friends tell me. With the weather in the northeastern United States as bad as it has been, I’ve not been venturing out too often since my trip to New York – but a good time is still to be had. Encouraged by some of the Americans I’ve made friends with, I’ve started ice-skating fairly regularly. While fun for us, we’ve had a mixed reaction from some of the regular skaters because of some of our antics, which have included skating round with American and British flags billowing behind us. 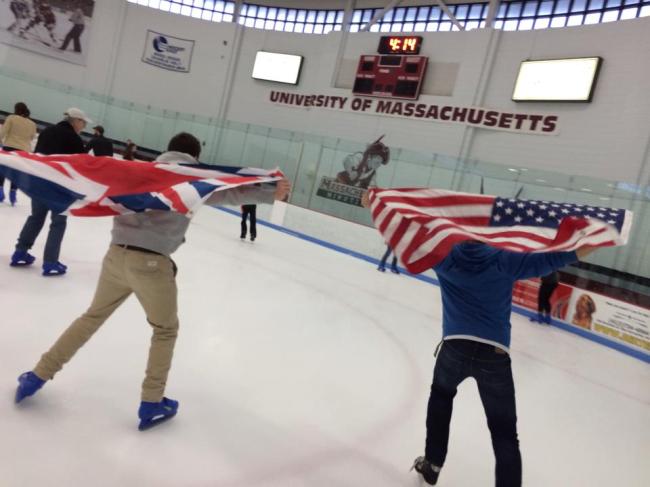 As well as picking up a new sport, I’ve had to get to work due to mid-term exams in all my subjects. While not counting for a huge proportion of the final grades or being particularly arduous, these exams are still taken seriously by everyone here (except those international exchange students lucky enough to be on a pass/fail programme). Thankfully, they’re all scheduled around the same time so that they’re all over quickly and, hopefully, painlessly.

On a slightly more enjoyable note, spring break is in less than two weeks and everybody is planning their various trips with ideas ranging from Cancun, Mexico to Miami, Florida. I however will be flying to Philadelphia for the break to see my cousins at their place, something I haven’t done for almost nine years, so I’m very much looking forward to seeing them all (and the city, I’m here to travel around after all).