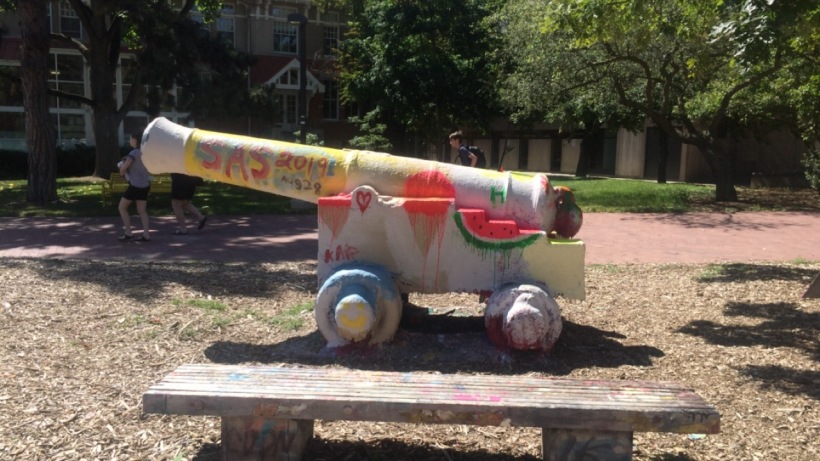 I have been in Canada for two weeks now, in a small university town called Guelph. (Pronounced Gwelf: It sounds a bit like the feeling of making mud pies as a kid.)
I’d like to think that I’m a pretty organized person. I spent hours upon hours researching when I first got accepted onto the study abroad program. Perhaps part of the fun however, and certainly the things you learn the most from, are the surprises you can’t predict.
That’s why I’ve decided to discuss some of the not-so-obvious shocks I’ve had since arriving.

Immigration
The crowd control barriers are endless at Toronto airport, and there was a confusing moment where I had to pick up a ticket and then turn around and go backwards before proceeding.
I’m a pretty anxious person, and in my mind, I imagined being ushered into a small grey room with a desk, and then grilled about my return flights, my funds, the few countries I’ve visited in my life and my political swing.
In reality, the process was much less scary, but took way longer.
It’s worth reading up on the restrictions on what you can bring into the country before travelling. This way you can avoid panicking about being deported for bringing in an egg sandwich, like I did (Spoiler alert: they didn’t care about the sandwich).

Jet-lag
The day I traveled to Canada, I woke up at 8 in the morning. My seven-hour flight left at 12.30. Immigration took ages, and then I had to wait four hours in the airport for one of the university organized buses. By the time I got out of the terminal it was dark, and by the time I got to bed that night I’d spent over 20 hours awake.
It doesn’t sound that bad right?
It wasn’t half as bad as I thought it was going to be.
Until I woke up at three the next morning and couldn’t get back to sleep.
And I’ve been told it’s worse travelling in the other direction. Ugh!

Sunburn
I’m pretty pale, but I still didn’t expect to burn in my first week in Canada.
While I haven’t needed my big fluffy coat yet, I’ve been surprised how many different temperatures I’ve had to deal with in the past week.
The temperature the first few days was around 25 degrees outside. A decent British summer day, but nothing to get too excited about. You might be surprised to learn however, that Guelph is just slightly further south than Toulouse in the south of France, meaning that it receives the same amount of sun. It just doesn’t get as hot because of winds coming down from the arctic. This means the sun is much stronger you expect it to be. Locals even warned me that you can get burned from the sun reflecting off the snow in winter!