My semester at USyd has ended, but I chose to stay here over Christmas and New Year’s. Why? Just look.

I was lucky enough to view the New Year’s Eve celebrations in Sydney from the Opera House itself.  Spending 16 hours in the 30 degree heat – yes 16 hours – getting sunburnt, constant naps, few fights, camping outside of the Opera House (literally), it was all worth the struggle at midnight.

The first set of fireworks start around 9pm that last around 10-15 minutes. A “pre” celebration I guess. The second set of fireworks commence at midnight, exactly at 12am as we enter January 1st. Counting down with millions of people from all over the world was an incredible feeling itself. NYE in Sydney is probably the first most watched celebration that occurs around the world (sorry Auckland) and to witness it in person is a once in a lifetime opportunity for sure.

I knew from the start that I wanted to watch the Sydney fireworks. Word of advice: you must start planning at least a month ahead of the date. Figure out your vantage point for viewing that works best for you. You can get all the information you need at this website: https://www.sydneynewyearseve.com/ . If you aren’t very good at planning and have a bit of cash to spend, lots of points around the Harbour Bridge offer a guranteed viewing spot that you can buy, such as restaurants around the harbour will have a “New year’s dining experience” offer. Although, they can be very pricey! Of course, like most people, I wanted to get the ultimate NYE experience. After a bit of research, I decided my ultimate spot to view the fireworks, was at the Opera house itself. The Opera outside house has a straight view of the Harbour Bridge (and it’s free!). I also highly recommend Mrs. Macquire’s Point – it has the view of the Harbour Bridge AND the Opera House. Both spots are very instagram worthy! To get any of the popular spots on NYE, you have to wake up early. Camping is forbidden at the points and points of entry open to the public at around 8am – however, the queue for entry is waaaayyyyyyy too long by then already.

The crowd with a music stage to keep up entertained

My day started at 7am on 31st December. I had packed all my lunch and dinner preparations for NYE in advanced the day before. I left my room at around 7:30am and got to the Opera House by 7:50am (as entry was at 8am). When I reached, the queue to get in was already so huge! I was so scared we wouldn’t find a spot. About an hour after waiting, we made our way through to security (no alcohol allowed guys, sorry) and tried spot hunting 30 minutes after. All the good spots were unfortunately taken, but we kept walking around and not giving up hope. Luckily, my friend and I spotted this one teeny tiny space right IN FRONT of where the harbour bridge was, enough to fit us both. We literally ran for it and wouldn’t move. We literally camped outside of the Opera House, in front of the Harbour Bridge – surreal.

Spending 16 hours in the sun is no play in the park, especially if the weather is not what you expect. The weather was scheduled to rain, so of course I brought an umbrella, with high temperatures of 25 degrees. But that’s not what it was. Around midday, the sun appeared out of nowhere and the temperature was probably around 30+ degrees. This probably lasted all day until the evening. And of course, I forgot to pack sunscreen! Luckily, my friend had some, so I guess I didn’t get THAT burnt.
Top tip: Bring lots of water and fluids to stay hydrated, an umbrella and sunscreen. Don’t trust the Sydney weather.

Last but not least, Happy New Year from Sydney! 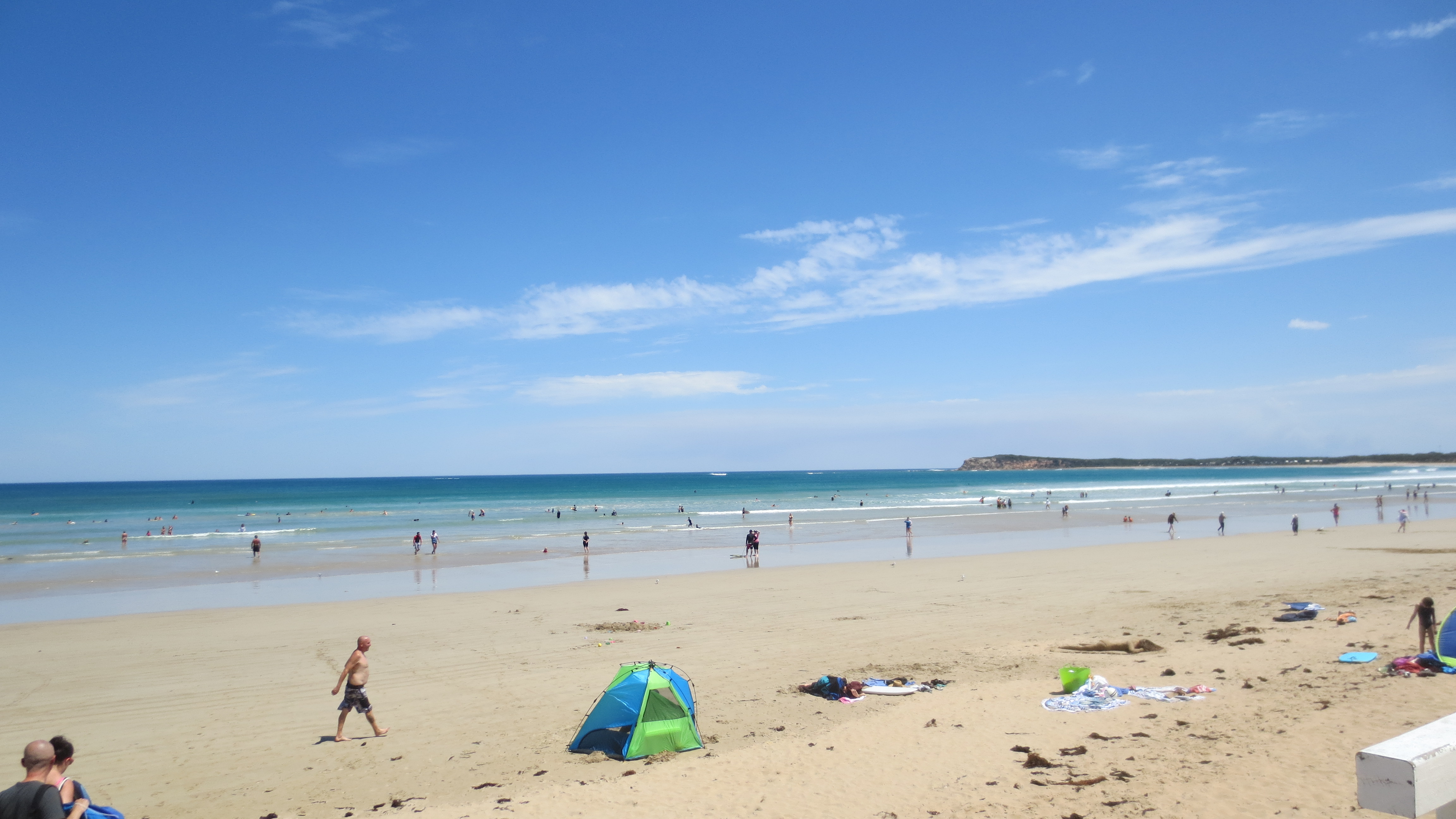 I knew I wasn’t going to be going back home to the UK for Christmas, which was sad but it meant I got to experience Christmas in Australia! Since I wasn’t able to spend they day with my family, I was kindly adopted into the home of one of my housemates, Rachel, who lives in Kyneton which is near Melbourne but very much not urban at all. I had a great time out in the country for a week! END_OF_DOCUMENT_TOKEN_TO_BE_REPLACED As mentioned in my first blog post, travelling around Australia is one of the things I wanted to do during my exchange time at ANU. So why not start at Sydney, the iconic city of Australia and the biggest city closest to Canberra. So far I have been to Sydney twice during my time here, once to visit my relatives in Sydney and the second with other exchange students I met in Ursula.

Instead of starting off in the city centre of Sydney like most people would do, I chose to begin my journey in the magical Blue Mountain, one of 15 World Heritage places included in the National Heritage List. However, there is just too much to do in the Blue Mountains and too little time so I only went to the Jenolan Caves, which is filled with limestone and is the oldest discovered open caves in the world. Once you bought tickets for any of their tours, you would receive a free tour and discounts for other tours which will last for a year.

Other than normal walking tours, I also did an adventure tour where you have to wear helmet, headlight and climb with ropes. It was really fun!

For more information on the Jenolan Caves, please go to http://www.jenolancaves.org.au/

In order to allow me to have a taste and glimpse of Australian beaches and coastline, my relatives in Sydney took me on a car tour along the South Coast. According to Wikipedia, the South Coast refers to the narrow coastal belt from Sydney in the north to the border with Victoria in the south, in the south-eastern part of the State of New South Wales. We got there when it was sunset which made the magnificent scenery even prettier. Even though it was too cold for a swim, the view of the coastline was breathtaking.

As a proof of being in Sydney, we went to the Harbour Bridge at night. It was looking at the Sydney Harbour Bridge and the Opera house, the two iconic and postcard like view, when I felt like it was for real that I am currently in Australia.

Have you ever had fresh seafood as breakfast? I had. To give myself energy before my 3-hour-ride back to Canberra for the start of the semester, I went to the Sydney Fish Market for breakfast. You can see them opening the oyster, cutting the sashimi and cooking the seafood you ordered. It was delicious.

Our first plan of the day was to go to the Royal Botanic Garden but we were fascinated by the view of Hyde Park and went there first instead. Hyde Park is the oldest public parkland in Australia in the central business district of Sydney. If you happen to be there, do go to the Archibald Fountain, it is highly likely that you would see a rainbow or two.

Before we arrived at the Botanic Garden, we made another stop to the St. Mary’s Cathedral. It has the greatest length of any church in Australia. Similar to most cathedral, the outer and interior structures were gorgeous and worth the stop. Too bad we could not capture the interior on camera.

The Art Gallery of New South Wales was also really close to the Botanic Garden. It was a pity that we did not have the time to go in but it is strongly recommended.

Finally, we arrived at our ‘first’ stop, the Royal Botanic Garden. We definitely came at a right time, it was not crowded and it was almost spring so flowers were blooming. We also listened to the suggestion from the lady in the information centre and got a perfect view of the Harbour Bridge and the Opera House.

We then proceed to the Sydney Opera House which is right outside the Botanic Garden and discovered the construction idea of the Opera House.

After taking a rest at the hostel that we were staying, we walked to the Darling Harbour. We first went to the Chinese garden of friendship.

Then casually walk around the harbour, taking photos of the fountain, admiring the well-facilitated kids’ playground and discovered the Sign for the Dream, the Olympic Journey Celebration Pathway Mural. It was like a snakes made from plates of wishes with some good quotes. Here are some of them.

After that, we went to the National Maritime Museum, which is the only Federal government operated museum located outside of Australian Capital Territory (Canberra).

Next, we went to the Madame Tussauds Sydney, which was one of our main purposes of going to the Darling Harbour. The stars in there are of course legends and mostly Australians, but other than that, they were also picked together with some of their famous quotes. “If you just be safe about the choices you make, you don’t grow” by Heath Ledger.

The Darling Harbour is really pretty at night. There is also LED wall on two of the buildings at the Darling Quarter which could be manually controlled by us. It was fun! We played the classic game snakes on the wall and wrote our names.

We went to Circular Quay early in the morning to catch a ferry for Manly Beach and took a perfect glimpse of the Harbour Bridge and Opera House from the harbour. The beach was named manly by Captain Arthur Phillip inspired by the confidence and manly behaviour of the indigenous people living there.

from my friend Eric Ariake

The walk from Manly Beach to Dee Why Beach was around 6km and took us an hour. Thanks to the fantastic view which made our sweat worth it. We also passed by two other beaches on our way, Queenscliff Beach and Curl Curl Beach.

One our way back, since The Rocks, a tourist precinct and historic area of Sydney is just right next to the Circular Quay, we went there to have a look. Since Australia was once ruled by England, the building reminded me of Manchester. There was also a weekend market.

I personally believe that the best way to experience a country and get involved in its local culture is through sports and music, which is why our main purpose of this Sydney trip was to watch the rugby match at Sydney Olympic Parks –Australia Qantas Wallabies VS New Zealand All Blacks. There wasn’t as much chanting as I thought there would be but it was still a great game.

When you are in Sydney on a sunny day, what else would be better than going to the Bondi Beach, one of the most famous beaches in Australia? It is also advisable to not just only stay in Bondi Beach, but to walk around as well, to the flat rock, to Tamarama and to Bronte Beach.

After spending the whole morning and afternoon at Bondi, we went to the Sydney Tower when it’s sunset. The view was gorgeous and we chose the right time slot to go (5-7pm) when we can see how Sydney looks like during the day, sunset and at night. The ticket to the Sydney Tower Eye also includes a short 4D video clip introducing Australia.