As a celebration of the 100th birthday of Canberra, the ACT (Australian Capital Territory) Government provided the Centenary Loop bus which operates every weekend for free to some of Canberra’s national icons and attractions.

At the National Film and Sound Archive, other than portraying the history of Australian film and sound industry, there was also an exhibit showcasing the names that were considered to be the capital of Australia, ‘Sydmeladperho ‘ was one of them, probably representing Sydney, Melbourne, Adelaide and Perth.

Besides the loop bus, another way to explore Canberra is to cycle or walk around the Lake Burley Griffin. While doing so, you might hear music coming from the National Carillon, from time to time. The Carillon, a musical instrument comprising 53 bronze bells, was a gift from the British Government for 50th anniversary of Canberra.

Along the lake, you would also find series of plinths marking the Australians of the Year. The plinths were not placed randomly, they were placed on five metal strips, in musical note position to the score of Australia’s national anthem.

Canberra has two main mountains, namely Mount Ainslie and Black Mountain. You could enjoy a brilliant view of Canberra on both mountains. The Telstra tower is situated on Black Mountain which will give you a height advantage.

Under the Black Mountain is the Australian National Botanic Garden. Just like any other Botanic gardens, you could expect a large variety of plants and leisure walking paths. There is also a Eucalyptus Rainforest. 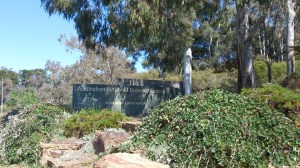 Last but not least, there is the Cockington Green Gardens where you can see the miniatures. There is a model village based on British architectures and model of some of the most famous international attractions.