I quickly learnt that as long as you are by a beach, with a cool crowd of people and have drinks then you are set for Australia Day wherever you chose to spend it, and Byron Bay definitely ticked those boxes. An important part of Australia Day is Triple J’s top 100 – a popular radio station that counts down that years most popular 100 songs, so you need to make sure that’s on too. I had high expectations of my time in Byron and it definitely lived up to them – a cool, backpacker town with lots going on and lots of cool quirky places to hang out. Perfect for my Australia Day experience.

The end of Australia Day only meant one thing – getting our house and transport for the next two and a half weeks – the beautiful ‘Wicked’ campervan. Myself and four crazy friends were beginning our east coast road trip from Byron up to Cairns in a 3×1.5 metre van. The first thing anyone asked us was how on earth do you sleep in that?! And the answer is OBVIOUSLY… two people lie on mattresses on the floor next to each other, the next on a mattress horizontal at their feet and the last two (me being one) in stretchers suspended on chains from the ceiling. Needless to say it was a tight squeeze! We got used to living on minimal sleep and being woken up at very points every night as if one person wanted to go to the toilet then everyone else knew about it.

When leaving Byron our first stop was the Gold Coast for a day of theme parks and an evening of ‘cabaret’ at the well-renowned ‘Draculas’.

From there we went to Brisbane to tick off Queensland’s capital city and a pit stop at one of my friends who lives there for a comfy bed for the night and a decent shower before the next bit ahead. Heading north from Brisbane we had two nights in Noosa – probably my favourite place we visited. Cool surfer town with a kind of French vibe – tree lined street with lots of cute outdoor cafes and fruit bats in the trees!

After Noosa, arriving in Bundaberg was very underwhelming – we arrived after the shops had closed and there definitely didn’t seem to be much going on in the town. However after bumping into a cute old man, who told us of a cute caravan park by the sea in the nearby town of Bargara, we ended up moving on from our planned destination and spent the night there. Rockhampton had a similar vibe to Bundaberg when we first arrived but after checking out the trusty Lonely Planet we found this random bar that summed up this supposed cowboy town in one – it had a rodeo and everything and the guy that owned it was genuinely walking around in his day to day clothes of a cowboy hat and cowboy boots – amazing. 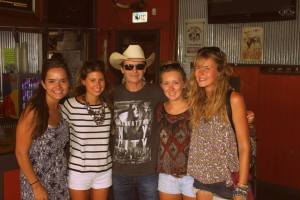 Having said that Noosa was probably my favourite place we visited, the day we had up next was probably the coolest day we had. Our first experience of Australian rainforest – yes it does rain in Australia! Our day was spent driving through incredible scenery, finding an old man in the middle of the rainforest that didn’t look like he had seen another human in a good few years and wading our way through flooded roads. However the day just got better and better – our campsite for the night was a secluded spot on top of a hill overlooking a whole valley. Needless to say the views were absolutely breathtaking and we genuinely felt like we were on top of the world.

The next day we were back to tourist central, arriving at the one and only Airlie Beach, with a couple of nights there before heading out to the Whitsundays. We spent two days at a night at the Whitsundays, sleeping on the sailboat with about fifteen other people. Even though the weather was temperamental, the islands were still absolutely stunning and ending a few hours on the beach in glorious sunshine with running off it and hiding under a tree when the storm came only added to all the fun. The second day was spent snorkelling and seeing some amazing fish – the one that stands out is definitely the Maori Wrasse ‘Elvis’ – just look at the picture and you’ll understand why! 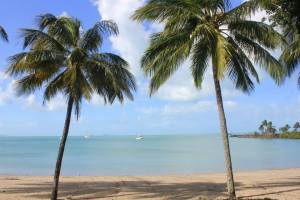 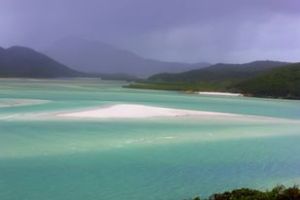 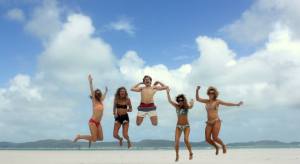 Townsville came next, however we found you only really go to it if you’re going to Magnetic Island, as the town’s rather ordinary.  The next day was a day in Australia you’d only have road tripping the east coast in an old van in rainy season – flooded roads and no way of getting through. Without a 4×4 there was no way our poor van was getting through some of the roads – and especially when at some point there was over a metre of water! So our journey through the next national parks were pretty interesting, We just made the most of it – being English and as everyone keeps telling us, we can cope with the rain, we danced, ran and jumped through it, and had rainy swims in rivers. However one of the highlights was definitely going to ‘Frosty Mango’, a café that does all things mango, and having coffee with a mango muffin with mango jam, whilst eating a mango and with mango ice cream – yum.

Arriving at our next destination Mission Beach, and finding that yet again we couldn’t do what we had planned due to the weather (we had wanted to go to Dunk Island), we cheered ourselves up with a croc burger (no joke) and a few drinks. Instead of heading to Dunk Island the next day we explored Mission Beach and the surrounds more. Crazy that next to rainforest-like walks, there was a rugged beach and even crazier that these beaches had saltwater crocodiles in them, so you couldn’t swim! – Just another confirmation that every animal in Australia, land or sea, big or small is out to get you! 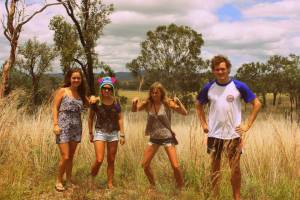 We had a brief stop off after that at the tiny town of Etty Beach before heading inland for the last bit of our road trip to Cairns, doing an ‘off the beaten track’ route through rainforest, lakes, mountains and eventually we made it to Cairns, still in one piece, still all speaking to one another, but in desperate need of a shower!

My time in Cairns was great, although I didn’t like Cairns itself – touristy, pretty trashy and not much culture to it in my eyes, all the trips you can do around Cairns are great. First and foremost – I snorkelled the Barrier Reef! – Wow, just wow, I genuinely felt like I was in Finding Nemo! Just being able to say I’ve seen the Barrier Reef which most people only dream of, to me, is just incredible. Another day was spent at the Daintree Rainforest and Cape Tribulation north of Cairns, another completely different environment but equally as amazing. We managed to see mud crabs, snakes, blue tongue lizards, crocodiles and cassowaries all in a days work! Last but not least our last day trip from Cairns was to Port Douglas, a beautiful little seaside town north of Cairns, with a strip of cute little shops, restaurants, bars and cafes and that’s about it! 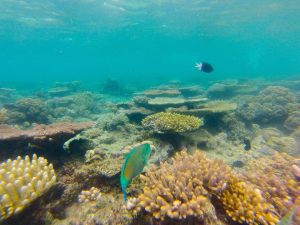 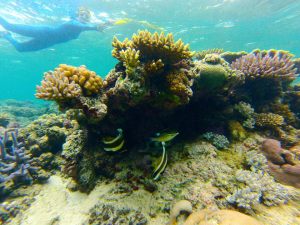 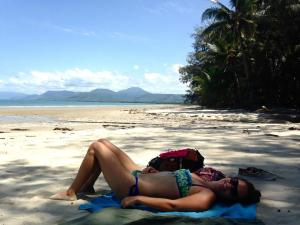 I’m back in Perth now, and although I have no savings left, and only a couple of hundred dollars to my name I had the most incredible three months, definitely what study abroad years should be made of! However I’m really excited to be back at uni, I’m doing some really interesting units this semester and it feels nice to be back in one place, not living out of a rucksack and with my own bed!