Last week, I had one of my favourite days while being at Wellesley;Marathon Monday. This tradition occurs every year on the day of the Boston Marathon. Wellesley College is famous for its Scream Tunnel, where students line the section of the course that passes next to the college grounds to cheer on the runners. Many runners who had take part in the marathon say that running past Wellesley is the best part of the day. As Wellesley is at roughly the halfway point of the route, the cheers from the students really did seem help to boost the runner’s spirit and encourage them to continue to the end.

Even before the marathon had officially begun, the campus was full of people. There were many different television crews as well as an official documentary team. Following the terrible events of last year, the people of Boston seemed determined to show that they could overcome the tragedy. The week before the marathon there been a memorial for those who have lost their lives due to the bombings, and the marathon itself seemed to be more a celebration of the Boston spirit. 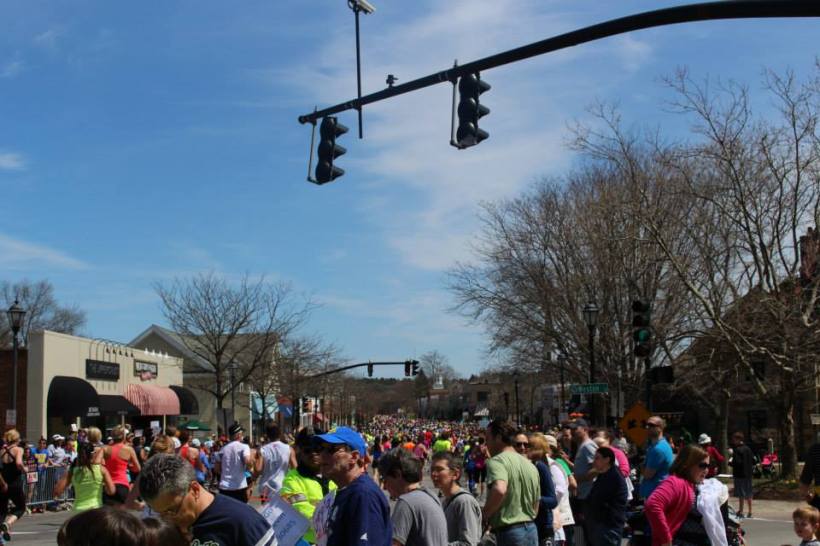 The first people who went past were the elite runners. They seem very focused and determined and did not really seem to pay attention to us which is totally understandable considering they were competing against each other. But then the other runners came and the excitement began. The mood was electric. Everyone was cheering and it was great!  Another Wellesley tradition is to try and get runners to kiss you as they go past. Students make signs saying “kiss me I’m <insert adjective here>”. Of course had to go for ‘kiss me I’m British’ and it worked very well! I got quite a lot of kisses as well as a few of the runners wanting to take selfies with me just because I was from the UK!

Students at the college also made signs before the event to cheer on people they knew who were taking part in the marathon. I managed to spot one with a Union Jack on which I was very pleased to see!

The Boston Marathon attracts over 30,000 runners so we were shouting for a very long time! After I had cheered until I thought I’d lost my voice, my friend Melanie and I went to Munger Meadow, an area on campus that had been set up with lots of food and many activities from a Bucking Bronco to a photo booth. They also had a band playing which was lovely and really added to the fun feel of the event. Luckily, and a huge change for the majority of my time here, it was a great day weather-wise. The sun was out but it was not too hot, a relief I’m sure for those taking part.

Marathon Monday was a truly great day. Many Wellesley students say it is their favourite tradition while at the college and I can definitely see why. I was so impressed by the determination of the people of Boston to overcome the events of last year and celebrate what is a truly great city.