Over the Mid-Semester break I was lucky enough to go to Fraser Island with my friends, Sophie and David. Fraser Island is the World’s Largest Sand Dune. The island is a massive collection of sand that gets dragged in by the Pacific Ocean currents and stretches about 120 km long but only about 24 kms wide. Fraser is a World Heritage site so there are no roads, only sand tracks that can be accessed by 4WD. Whilst we were on Fraser our tour guide told us that if the island did not exist, all the sand that gathers there would have traveled further North and completely covered the Great Barrier Reef, meaning that we might not know about it’s existence.

As I said, the island is only accessible by 4WD and so our best bet was to go with a tour company. We found a pretty good deal last minute that was reduced so got lucky! Our trip included all food, travel and accommodation. We got to camp right on the beach for two nights, watching the moon rise as we ate our dinner! We were in a group of about 20 people –  a mix of backpackers, families and people on holiday. It was a really good atmosphere and so we made lots of friends. 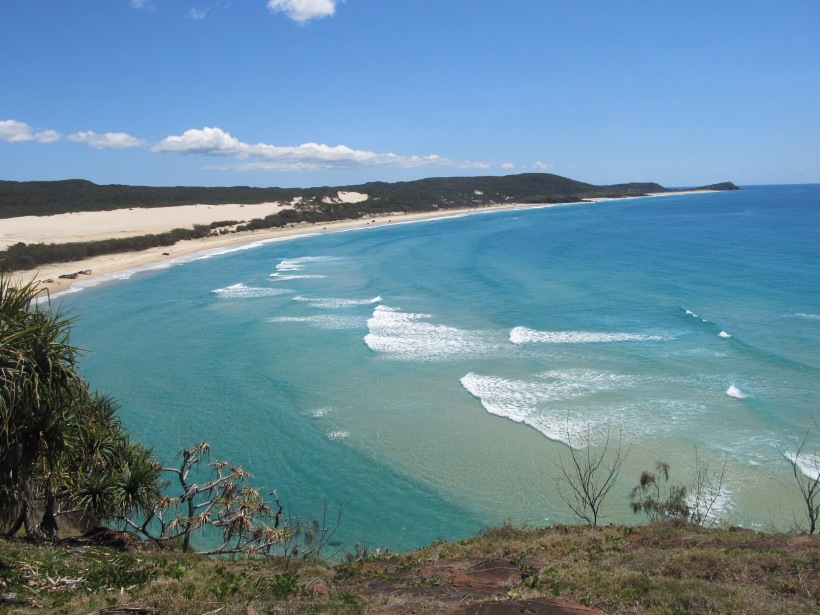 The view from Indian Head

Even though Fraser is a sand island the central part of the island is completely covered in dense Rain forest with lakes and creeks. We spent a lot of time at the lakes as it is unwise to swim in the ocean because of all the sharks. I only saw one shark the whole time I was on Fraser, but saw lots and lots of Humpback Whales as it was migrating season! Every so often our tour guide would stop the car and point out to the ocean where you could see a whale coming to the surface for air – probably one of the most amazing things I’ve ever seen. They jump up vertically, taking big gulps of air and then swim on for another 8 minutes or so before they take their next breath. Whilst we were on Indian Head (a look out Cliff) we also saw an Eastern Brown Snake – the second most venomous land snake in the world. They’re pretty fast as well – our Tour Guide said that you would have to sprint to out run one. Apparently they can be pretty aggressive, unlike most snakes who are quite passive. When we were driving away from Indian Head we also saw a Wild Wallaby which is apparently a very rare site on the island. 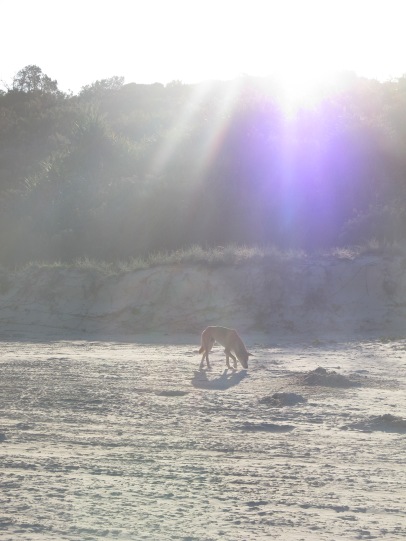 Wild Wallaby and a Dingo

Fraser is probably one of the most beautiful places I have ever visited. I’ve never seen water so clear and the island is kept so clean with no rubbish! Everyone is so environmentally aware of the impact they have on the island so that it can be preserved for other people to enjoy. Our Tour Guide told us that every few months or so they change the campsite location so as to reduce impact on the flora and fauna found in the immediate area. They were also pretty conscious of Dingoes – there have been several fatal attacks in Australia where Dingoes have managed to get into people’s houses. A lot of farmers in Australia see Dingoes as pests and so they are regularly shot, however they are just misunderstood. People are uneducated and treat them like domestic dogs, but they do not have the same temperament. Therefore dingoes have become comfortable around humans and  that’s when accidents happen. Unfortunately because of previous attacks, when a dingo comes into close contact with an individual the Park Ranger has to be contacted and the Dingo is shot so as to avoid future attacks.The mentality that a lot of Tour Guides have is if you leave them alone they will leave you alone.

The three days and two nights we spent on Fraser Island were invaluable and educational. I learnt so much about different animals and the science and geography of the island.At every site we visited our Tour Guide would tell us the Indigenous story of how Aboriginals believe that particular formation was created. The Butchulla people are the original Indigenous tribe that lived on the island – although I think there is only one direct descendant of the tribe who lives on Fraser. I could write pages and pages on Fraser but for now I’ll just leave you with this picture of Eli Creek. Out of all the sites we visited Eli was my favourite. The Creek stretches about 1 km in land. Me, Soph and David along with a big groups of friends waded up the creek and then floated down together. There is dense Rain forest either side of the water and so only small amounts of light trickle through the canopy – although you can still see how clear the water is – such a magical experience!