So here it is. After 13 weeks, 8 midterms, 9 lab reports and countless homeworks and surprise quizzes we finally got a week off. Thanksgiving break; the first decent length of time I’ve had to escape Illinois and actually see some of the country I’ve been living in for the past three months. As any of you who are friends with me on Facebook, Instagram or Snapchat will know I definitely made the most of the (much needed) time off as me and a couple of other fellow Brits set off on an East coast adventure I like to call “One Week, Four Cities”.

If I tried to talk about every single thing we did during the week I would be writing this blog for the next month so I’ve tried to come up with a way to keep it (relatively) short and sweet. While the three of us were travelling, we did this cute (some might say lame) thing at the end of each day where we all shared our “peak” of that particular day, so I thought that would be a good way to summarise the highlights of the trip.

The journey to our first city was pretty stressful to say the least (waking up at 1am, getting to the airport less than an hour before our flight, then taking off in the middle of a legitimate snow storm) but it all worked out and a mere 8 hours after I first woke up we’d arrived…

After spending the first day catching up with an old friend (hey Devin), who I met while she was on her study abroad placement in Manchester two years ago, and exhausted by the early wake up and stressful outward journey we decided to leave any strenuous sightseeing activities until the next day and promptly passed out at about 8pm.

We spent Sunday exploring all the monuments, memorials and museums that DC has to offer (and that’s a lot). My friend was extremely moved by the World War II memorial in particular which features a wall of stars, each one representing 100 people who died in battle. An impromptu acappella performance on the steps of the Lincoln memorial was also pretty cool and made a great musical backdrop to my Snapchat story, if I do say so myself. Seeing the Washington Monument at night was amazing, and sitting at the top of the Lincoln memorial, looking out over DC at midnight was a definite highlight of mine. We also managed to fit in a visit to the Air & Space museum and take a ride in a flight simulator (10/10: would recommend, but be sure to tie your hair back because when it flips 360˚ you can’t see a thing). 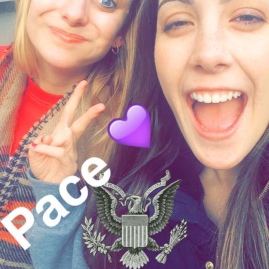 Highlights included; getting some fantastic views of the skyline from the top of the steps leading up to the Philadelphia Museum of Art (aka the Rocky steps), having lunch (and pretty much every other meal) at Reading Terminal Market, an indoor food market which offers literally any type of food you could want including quite possibly the best s’mores bars on the planet, playing Cards Against Humanity with a bunch of random Brits we found in our hostel and a walking tour of constitutional Philadelphia lead by everyone’s favourite tour guide: me. 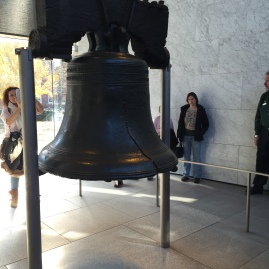 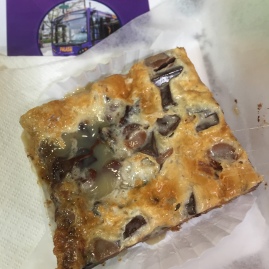 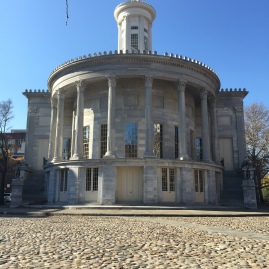 The day before Thanksgiving we set off to our next destination, a small town on the east coast you may have heard of called New York. One of my favourite moments of the trip was on the drive there, when we turned a corner and I caught my first glimpse of the skyline. My other friends were fast asleep at this point (sorry guys) and I was secretly quite pleased that I got to see it first. Our hostel was right over the road from Central Park so the first thing we did when we got there was hire some bikes and cycle round. It was such a nice day and a really relaxing way to see some of the city, while also getting some pretty fantastic photos. That evening we got burgers and walked around Brooklyn Bridge Park for some more great views of the city (to be honest, it’s not hard to find great views and photo spots in New York).

The next day was Thanksgiving which also happened to be my travel buddy and fellow blogger Rhiannon’s 21st birthday (I’ll leave it up to you to figure out how she celebrated that particular milestone). One thing that we were all excited to see was the Macy’s Thanksgiving Day Parade which featured giant inflatable cartoon characters, various American celebrities I’ve never heard of and the University of Illinois’ marching band, the Marching Illini. I have a (not so secret) soft spot for the marching band so this was definitely a highlight for me and made getting up at 6am to find a decent spot on the parade route completely worth it. You can check out all 14 minutes of their parade march here: https://www.youtube.com/watch?v=4blnevY073M&feature=share (I may or may not have watched it about 50 times already).

Truth be told we could have spent the whole week in New York and still not managed to fit everything in but we tried our best on the last day. We saw the Highline, Times Square, the Statue of Liberty, Battery Park, Wall Street, the 9/11 memorial, Grand Central Station and ended it all at the top of Rockefeller Center watching the sunset over the Empire State Building and Central Park (cue all of us simultaneously uploading the same Instagram photo). 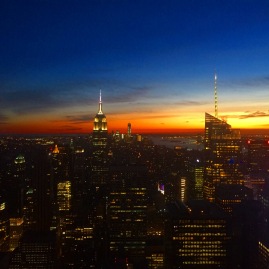 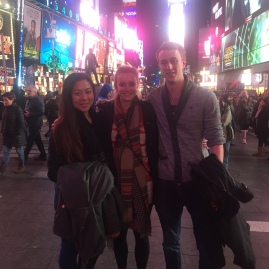 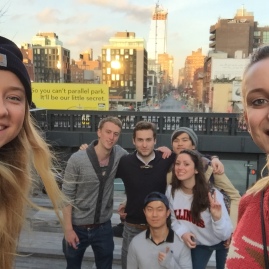 On our way back to small town Illinois, we stopped off in Chicago just to try and make the most of the last few days of holiday. We’d all made a few trips to Chicago over the semester so had already done all the typical tourist activities (although what trip to Chicago would be complete without a few photos at the bean). So instead, we spent the weekend making the most of the post-Black Friday sales. I got myself a sweet pair of fleece pyjama bottoms for the equivalent of about £10 and have refused to take them off since. We also went to see the new James Bond movie in probably the fanciest cinema I’ve ever been in (fully-reclining seats with footrests and tray tables), checked out the Chicago Christmas markets (Manchester wins on this one though, I’m sorry) and had some classic Chicago deep-dish pizza for our last meal of the holiday.

After all the excitement of the week it was pretty great to get back to campus, to see all my friends again and hear the stories of everything they did over the break. However, the relaxed feeling did not last long. We’ve only been back for about three days and it seems I’m already behind on all my work again. This semester has been such a whirlwind and I can’t believe it’s almost over, finals start next week and I fly home in less than two. It’s gone upsettingly quickly. But to anyone out there who is considering studying abroad, I say go for it. The workload can be crazy and American college can get pretty stressful at times but I’ve had so much fun, met some lifelong friends and done things I would never have got the chance to do back home. From rushing sororities, to college football games, to casually jetting off to New York for a holiday, I can’t wait to see what next semester brings!