Someone once told me that there are three cornerstones to Italian culture; Food, Family and Football; and not necessarily in that order. So far in my time abroad I have found that this holds (mostly) true and so I’ve decided that this year offers the perfect opportunity to dive head first into learning about traditional & regional Italian cuisine – partly for self-immersion and to experience as much local culture as possible, and partly to finally learn how to cook…

Naturally I couldn’t live in Italy for a year and not write at least one blog post about food – so here it is! Unsurprisingly Florence has turned out to be a bit of a foodie’s paradise so read on to hear  what I’ve learned so far about local Florentine traditions and my own personal experiences of trying my hand at classic recipes.

Autumn in Florence is a fantastic opportunity to get stuck in with experiencing the best that Tuscan cuisine has to offer due to the timing of the tail end of the harvest and the proximity of so many vineyards and farms in the surrounding countryside. There’s such a huge abundance of farmer’s markets at the moment and even in the center every street vendor has castagne bruciate (chestnuts roasted in a fire until they are quite literally black and burnt on the outside) and schiacciata all’uva (sweet grape tart very typical of central Italy in autumn and easily made at home).

schiacciata all’uva and other products at a local farmers market 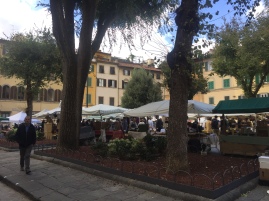 Going to these markets has been a great way of eating relatively cheaply (with amazingly fresh produce) and has also let me access a great network of knowledge for tips and advice – everyone is so friendly and enthusiastic to share their family’s particular traditional recipes and to tell a little about the products and how they can be prepared… and a great chance to practice some colloquial Italian!

The typical dishes of Tuscany have a heavy emphasis on root vegetables, bread and meat – tripe and lampredotto sandwiches in focaccia bread are extremely common and the latter is considered to be a regional delicacy (to try either in central Florence, you must go here) It took me a few weeks to realize that both are actually different parts of the lining of cows’ stomach, and I’ve got to admit as someone who has recently stopped being vegetarian I haven’t yet worked up the courage to try it.

However the very particular speciality of Florence is known as Bistecca alla Fiorentina which is a (absolutely huge) steak cooked in a very specific style – the outside is charred to the point of nearly burned, whilst the inside should stay quite bloody/rare and only moderately warm. They do come extremely large – Florentines measure the size in ‘fingers’ – and restaurants will expect one dish to serve from 1 up to 3 people. I’ve commonly seen it cooked in a pan with really viscous balsamic vinegar.

A few weeks ago I was very lucky to be invited by a friend at uni to a traditional restaurant in Fiesole (a small town in the hills very close to Florence) owned and run by her childhood friend, after explaining that I’d made it my mission to learn about Italian cuisine. There we tried some INCREDIBLE dishes very very typical of the region– unfortunately I only managed to grab a quick picture of the first round of small antipasti before we got stuck in (oops).

Another very classic trait of Tuscan cuisine is salt-less bread which really takes some getting used to. As the legends would tell you, Florentines stopped putting salt in their schiacciata (local take on the Italian bread focaccia) centuries ago when the city was, as ever, at war with neighbouring enemy Pisa. The latter eventually blockaded the River Arno, stopping all salt imports into the city. In reality the real reason stems from the extremely high price of salt in the middle ages which the (then) poor Tuscans couldn’t afford to include in their baking and apparently the tradition has stuck ever since.

This was something to bear in mind when I started baking my own focaccia at home which after much trial and error I like to think that I’ve cracked. I’ve tried lots of different recipes to get the bread style that I personally love, however I’ve found this one to be the easiest & most reliable for a basic focaccia bread – if you’re feeling a little more adventurous I’d recommend following this article for a more authentically Florentine schiacciata al’olio. Here are my latest attempts…

A particular foodie delight of living in Florence is the mercato centrale which is a daily indoor market in the central area of San Lorenzo and by far the largest in the city. On the ground floor you can find everything from artisan olive oil and salsa al tartufo nero (black truffles minced into a thick, spreadable sauce) to fresh fruit and vegetables and the Tuscan goat’s cheese pecorino of which there are many, many varieties. A smile and trying out your best Italian will get you a long way with the vendors who usually let you try a little of whichever one in particular you fancy – recently I’ve seen pecorino with red wine, hay, coffee, chocolate or rocket. 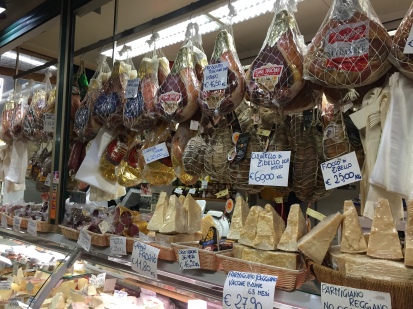 The first floor however is packed full of restaurants, food stalls and wine bars that share a communal benched seating area in the middle of the hustle & bustle of the rest of the market, and although still quite touristy many Italians also come here to eat their lunch during the day (all markets close by early afternoon). A few weeks ago I discovered my new favourite place to eat here which has a menu just for different types of mozzarella cheese – I did mention that Florence was a total foodie heaven, right?? 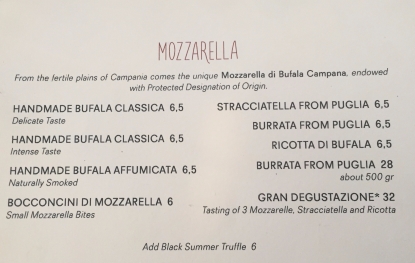 Smaller and less well-known food markets in Sant’ Ambrogio and Santo Spirito only happen on Saturday mornings or on specific weekends but are well worth the wait.

Other highlights include All’Antico Vinaio, a famous panineria (sandwich shop) in the Santa Croce area where you can order all types of fillings such as Italian cheeses (mozzarella, ricotta, stracciatella, pecorino), prosciutto, fresh tomatoes, basil, truffles, salads, salami and other cold meats. Apparently it’s the most reviewed place on TripAdvisor in the world and draws lengthy queues of Italians and tourists alike each evening – believe me when I say it’s easy to understand why!

Naturally as in every big city Florence also caters for late night revellers with its fair share of kebab shops and tacky takeaways, but stray out of the more touristy areas and you’re more likely to find a pasticceria to grab food after a night out. These places are hidden bakeries that actually open late at night illegally due to licencing laws, although not policed especially strictly, and for those in the know provide the best post-pub pizza you’ve ever had…

Travelling to other parts of Italy and different cities at the weekends has also been great for discovering different regional dishes as the cuisine varies enormously from one part of the country to the other. In general the northern territories (Bologna, Modena, Parma, Genoa, Milan, Verona, Turin) generally boast heavier dishes with meats and root vegetables.

Although I haven’t yet had the opportunity to visit in person this year, I’m a huge fan of Neapolitan cuisine which is famous as the birthplace of pizza margherita and calzone but also has some great lesser-known delicacies such as beef & onion Genovese sauce. I’m also dying to try some authentic walnut sauce (for pasta) from Liguria as its become such a favourite of mine to make – you can find an quick & easy recipe here.

I feel incredibly lucky to have met other Erasmus students from all over Europe in recent months as I’ve had the chance to learn about many different languages, cultures and cuisines and not just that of Italy. Most recently on Halloween some of us organised a dinner together where each person had to prepare and bring along one typical/traditional dish from their country or region – I was happily shocked at how well European students know how to cook!!! Perhaps it’s not normal to eat baked beans on toast 4 days in a row during your first 2 years at uni after all…?

After trying to explain several times that, aside from fish & chips or a Sunday roast (too difficult to pack into a Tupperware for 20 or so people) English cuisine is fairly dismal if not non-existent, I settled on an apple crumble & custard which seemed to go down okay.

Whilst Italian food is generally an amazing carby-delight, admittedly I’ve caught myself a few times missing comfort food from home – I’ll be looking forwards to having gravy over my Christmas dinner back in the UK instead of olive oil and black pepper, which is a very Italian way of serving meat. Come January I’ll definitely be packing my bags up again with enough peanut butter, marmite and sriracha to last me for a few months, instead of saddling my poor parents with a suitcase full of PG tips again!