So my arrival in Melbourne was, how do I put it? Surreal. Armed with the address of Glen, the brother of a family friend (tenuous connection, I know) who had kindly said I could stay with him and his family for my first couple of nights in the city, I announced to the taxi driver at the airport that I was going to ‘Caulfield South’.  My jaw dropped when we finally arrived at the address. Glen’s house was a massive, modern home, charcoal grey and with huge, two-story windows. Inside was no disappointment either. After being warmly greeted I was whisked into their foyer, which led straight to a spacious, open plan living area. “I could get used to this” definitely crossed my mind. Glen and his family were incredibly welcoming and made me feel so at home. They also had a boarder called Ben, a student, like me, studying music at the University of Melbourne, who had his best friend Liam from the Gold Coast visiting him. Ben really took me under his wing. Despite my jet lag, I was offered a ‘Dirty Granny’ (don’t worry, it’s a type of cider) and after a couple more Ben, Liam and I were on our way to a gig a few of his friends from uni were playing at. Ben gave me a spare Myki card (used on trams) and off we went. Whilst on the tram however, Ben seemed a bit jumpy. “Is everything alright?” I asked. “Yep. Totally. Yeah. Well, actually. There’s not actually any money on that Myki card I gave you…but don’t worry. There’s none on mine either. But erm, well if we’re caught it’s a $200 fine. So basically, I’m just keeping a look out in case we have to run from any tram inspectors”. And so really, this was my introduction to the rather odd tram system that Melbourne has: ‘Public transport is free… until you get caught’. Basically, if you choose to risk it and not pay for a tram, you’re pretty much going to get away with it. Unless, that is, a tram inspector hops onto your tram whilst you’re on it. They could even be working undercover in plain clothes. This results in quite an interesting journey, split between constantly eyeing up your fellow passengers (especially the shifty looking ones) and looking out of the window, in order to spot a high-vis-orange-jacket-clad inspector within enough time to spare for you to jump off as inconspicuously as possible. Well, at least it livens up your journey…

Ben and I on the tram!

Anyway, Liam, Ben and I didn’t encounter any inspectors and made it to the gig without any trouble. It was in the centre of the CBD (Central Business District), the heart of the city, and this was one of the first chances I got to get a real feel of the city. First impression: I loved it. That night I met tonnes of Aussies – they couldn’t believe I’d only arrived that day. They were as friendly and fun as I’d imagined Aussies to be.

Once my couple of days at Glen’s were over, it was time for my welcome week. For this I stayed at Trinity College (the posh one!) for four nights and it was a great chance to meet all the other international students. I’m so glad I did it! Brazilians, Americans, Danish, Dutch, Japanese, pretty much all nationalities were there and it was great to get to know people from all over. Our days were packed full of activities, including wine tasting at vineyards, tours of the city and an aussie rules football taster day, so we were constantly seeing the city and getting adjusted to aussie life. Probably the most memorable part of the week for me was our ‘Salsa Social’, but not for all the right reasons!! A salsa instructor came to teach us a few basic steps, which was great fun, at first. It gave us a chance to meet everyone in the group (albeit whilst being hip to hip, which was….interesting) and was a really good icebreaker. I was partnered with Naoki from Japan when the evening took a competitive turn. The room was divided in two and each side had to dance for the other, whilst the best couples were selected for a dance off. For some reason (to this day I don’t know) Naoki and I made it to the dance off. We did not know the steps. We did not have style. I think, we were in actual fact, the novelty couple. Anyway, the dance off happened and it was excruciatingly embarrassing. But nevertheless we stumbled though the steps and reached the end of the dance with our dignity relatively intact. The crowd then had to vote for their favourite couple and miraculously, for whatever reason (pity, being the most likely) Naoki and I were crowned salsa king and queen. It was really quite embarrassing. Anyway, the night went on. This time, we were learning the Merengue. Thankfully, Naoki and I didn’t make it to the Merengue final and as it came to the end, I breathed a sigh of relief. No more public humiliation. Wrong. Before I had a chance to reject my title of ‘Salsa Queen’ Naoki and I were again, asked to take to the stage. Cruelly, the instructor had another surprise in store for us. “So we’ve already seen what the Salsa king and queen, and the Merengue king and queen can do together. But what can they do solo? There’s no hiding now. Just yourselves and the music. Take it away!” And with that, we were ordered to dance for the crowd. Solo. Honestly, that’s the closest I’ve come to dying of embarrassment. After the ordeal, I was consoled by a kind Danish girl with “Anna, you were very brave”. My other friends merely said “we could not have done that”, so at least people felt my pain.

My group for the Melbourne Welcome Week

Wine tasting in the Yarra Valley 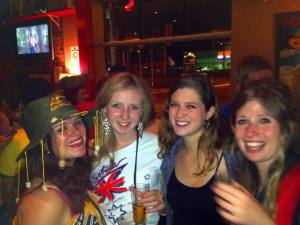 Anyway, those were a few highlights from my first week in Melbourne. It was such a great week, the Melbourne Welcome was a perfect opportunity to throw myself into Melbournian life and I would 100% recommend it. Most of my current friends I met in that first week, which has given me a really solid social base, which is great when you’ve just move to a strange city where you know nobody. My only advice to you would be to steer clear of salsa dancing!!!